…As bombs explode in Maiduguri ahead of President’s visit

President Muhammadu Buhari, yesterday, in Maiduguri, Borno State, urged troops of ‘Operation Hadin Kai‘ to remain steadfast as they go into the final phase of the campaign against insurgency and other forms of criminalities. 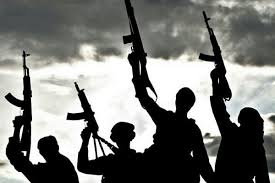 The President, who addressed the troops at the Air Force Base in Maiduguri, Borno State capital, during an official visit, said the entire nation remains grateful for the gallantry displayed in ensuring the gradual return of peace to the North-East, while condoling with families that have lost loved ones, and the wounded. He noted that the response exhibited across the theatre had shown extraordinary resilience and steadfastness in the face of adversity.

While noting threats posed by criminals through the employment of Improvised Explosive Devices (IEDs), he said substantial resources have also been directed at procuring equipment for explosive ordnance disposal. According to President Buhari, similar attention is being given to Intelligence, Surveillance, Target Acquisition and Reconnaissance Assets.

President Buhari expressed deep appreciation to the Government of Borno State for its continuous cooperation with the Federal Government in multiple spheres.

However, about one hour before the arrival of President Muhammadu Buhari to the State on the official visit, multiple bombs landed around the Maiduguri international airport, whereby at least five people have been reported dead.

The bombs, believed to have been fired from outside the town, began to land on different locations around the airport at about 10:45 a.m. Witnesses and security sources familiar with the development stated that at least 5 motorised explosives landed in mostly residential areas, killing and injuring many civilians.

According to a source, one of the bombs landed in Ayafe suburb of Ngomari, killing four persons including a 16 years old girl. Other bombs, he added, landed in Ajilari Cross, Moromti and at the Legacy Housing estate in Bulumkutu. The movement of people has been restricted in Maiduguri ahead of the Presidents visit to commission projects in the State.