Nobel laureate, Prof. Wole Soyinka, yesterday stated that Nigeria cannot remain one country if it fails to decentralise as fast as possible, adding that analysts, retired generals and others have maintained the same position. 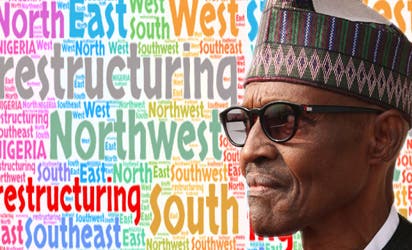 Soyinka spoke on a television programme, urging President Muhammadu Buhari to be more sensitive to the agitations of secessionists rather than bully them.

Soyinka explained that people are no longer intimidated by Buhari’s threat that ‘we will talk to you in the only way you understand.’

“It doesn’t wash with anybody any longer because if a nation is on a suicidal slide, the people who feel that they do not deserve that kind of suicidal plunge have a right to say ‘sorry, I am getting off before it nosedives,” he said.

He accused the State governors and senators of not doing enough to confront the challenges facing the country.

He said while the Senate has not utilised its powers to force the government to act the way it should, the governors appeared to be too timid to act.

Soyinka added that Buhari is not listening to the yearnings of Nigerians, and his administration did not really understand the applications, full responsibilities and commitments involved in a democratic regime.

He said he was alarmed at the understanding of democracy by the top hierarchy of government.