The Federal Government plans to toll the Lagos-Ibadan Expressway, the ongoing 2nd Niger Bridge, and other roads, to repay loans used to build them, according to the Central Bank of Nigeria (CBN), Godwin Emefiele. 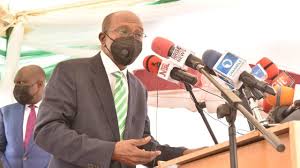 Emefiele, who stated this at the closing ceremony of the 12th Banker’s Committee retreat in Lagos, on Wednesday, said, “All of the roads will be tolled. And we know that in many other countries in the world, roads are tolled because those projects are commercially viable.

“They (loan) can be refunded with tolls so that maintenance can be done on a regular basis, and people will pay for it and enjoy good roads, good facilities; because that is the only way we can fund the infrastructure of this country, which is the large amount of money that is needed”.

The apex bank’s governor said the toll from the Lagos-Ibadan, Abuja-Kano expressways, and the Second Niger Bridge will be used to repay loans used to fund the project, adding that the three projects are funded by the Infrastructure Corporation of Nigeria, (InfraCo).

Emefiele further said that N1trillion of the N15 trillion equity for InfraCo was being contributed by the CBN, African Finance Corporation, and Nigerian Sovereign Investment Authority, adding that the remaining N14 trillion would be accessed from the debt market.

He said the Federal Government had approached CBN to provide some kind of bridge funding, which is almost about N170 billion that was provided for those projects to move on with funding.

“The entire scope of those three projects, I am told, is slightly above N1 trillion, but the numbers are being worked on”, Emefiele explained.

The CBN governor said he is “reasonably optimistic that more than 50 percent or two-thirds of this money is going to be raised locally.