The Chairman, Senate Committee on Army, Senator Ali Ndume on Tuesday said the Nigerian military lacks what it takes to win the war against insurgency in the country. 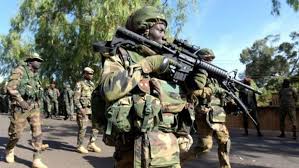 Ndume, who spoke while featuring on a television programme, said while the military has the right ideas needed to win the war, they lack the needed modern equipment to prosecute the battle.

Recall that the Federal Government had, in October this year, said it has taken delivery of the final batch of the 12 A-29 Super Tucano fighter jets expected from the United States.

According to the Minister of Information, Alhaji Lai Mohammed “All the 12 Super Tucano fighter jets have been received. As of this morning, all the 12 were here and they have been deployed to the North-East. We can see that the Tucano jets are actually game-changers.

“Most of the successes we have recorded in recent time is because of the acquisition of the new platforms, not limited to the Super Tucano”, he said.

However, Ndume said, “As the Chairman of the Committee that has oversight functions over the Army, the military still lacks the right equipment and are just managing what they have.

“The military needs to be given the wherewithal to finish this business of insurgency. The Army has all the ideas to win this war. What they lack is equipment and a new platform, especially a modern one”, he stated.

Speaking further, Ndume also lamented the number of security personnel in the country, saying that with over 200 million population, all the personnel of security agencies in Nigeria combined are not up to one million.

According to him, most of the job of security is supposed to be done by the Police, but that they are overwhelmed as the entire Police force is not up to 400,000.

The lawmaker also blamed the Federal Government for not acting fast by nipping insurgency in the bud when it first started. According to him, the government then played politics with the issue until it got out of hand.