Various women groups, yesterday, occupied the gate of the National Assembly in protest after both chambers rejected a Bill meant to create ‘special seats‘ for women. 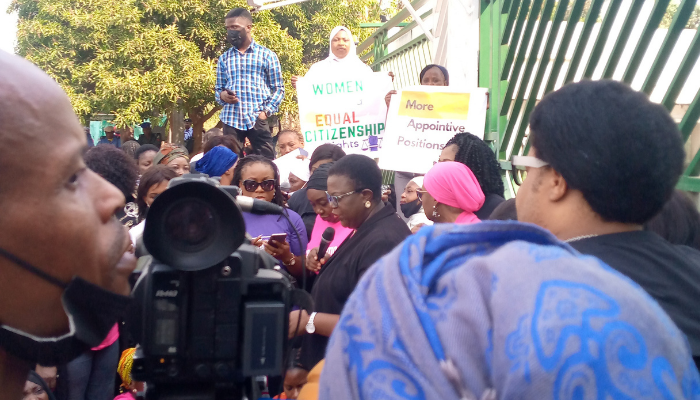 The women, who gathered early in the morning at the Three-Arms Zone, marched to the National Assembly gate chanting songs of solidarity.

The groups demand that the Federal lawmakers should reconsider the requests for 111 seats for women, equal citizenship, 35% representation in party leadership, more appointive positions in government, and vote in favour of these amendments.

The women were mobilised by the United Nations Population Fund (UNPF); Federation of Muslim Women Association (FOMWA); Women Organisation for Change in Agriculture and Natural Resource Management (WOCAN); Association of Women in the Arts (AWITA); Women In Business (WIMBIZ); Action Aid, Yiaga Africa, the Islamic Youth League, among others.

The Bill, titled: ‘Act to Alter the Provisions of the Constitution of the Federal Republic of Nigeria, 1999 to Provide for Special Seat for Women in the National and State Houses of Assembly; and for Related Matters’, was rejected after most of the lawmakers voted against it.

Recall that the lawmakers, during the plenary on Tuesday, voted on 68 Constitution Amendment bills.

The Bill for special seats for women was defeated in the Senate, with 58 votes out of 91, while in the House of Representatives, 208 out of 290 lawmakers voted against it.