President Muhammadu Buhari yesterday declared that imposition would no longer be allowed in the ruling All Progressives Congress, (APC).

Buhari spoke shortly after he revalidated his membership of the party in his hometown, Daura, Katsina State.

“Without any incentive, they must come out and defend the party at any level so that we, you and the party will feel secured and comfortable because the old time of putting hands in the pocket is over because the money is no longer available”. 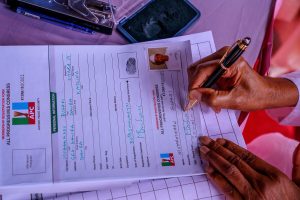 The President, who was accompanied by the Chairman of the APC Caretaker Committee, Mai Buni along with members of the committee; Senate President, Ahmad Lawan; State governors and other party members, said he was committed to ensuring that the party is returned to the people at the grassroots.

Buhari again recalled how his regime inherited a country without infrastructure despite the money made by past administrations.

He reiterated his call the nation’s elite to consider such factors before criticising his regime.