As insecurity persists in almost all the States in the North, the Coalition of Northern Groups, (CNG), organisers of “North Is Bleeding”, has charged President Muhammadu Buhari to declare a state of emergency in some states to end the reign of banditry and bloodletting. 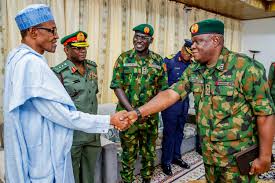 The group also urged Buhari to replace the governors of affected states with military administrators to ensure the terrorists are defeated, especially in Niger, Sokoto, Zamfara, Katsina and Kaduna states.

In an interview over the weekend, spokesman of the group, AbdulAzeez Sulaiman, said, “If President Buhari is to succeed, he must improve the number of boots on the ground, which are at present grossly inadequate”.

He added that after increasing the boots on the ground, he should quickly follow that up with “available legal windows to impose emergency rules in especially the frontline states of Niger, Sokoto, Zamfara, Katsina and Kaduna.

“The present governors should be replaced with military administrators until conditions improve significantly”, he stated.

He added that the President must “also urgently take steps to anticipate and checkmate the manoeuvres of the multinational interests and their local collaborators”.

“The President must make it clear to those foreign powers that Nigeria, just like any other democracy, would not be disposed to threats by either internal or external aggression”, he said.

Recall that the CNG had in the last week mobilised for what it termed a ‘mega protest’ against insecurity in the North after several days of ‘NorthIsBleeding’ campaign on social media. The campaign appeared to have been boycotted by southerners despite repeated calls for support.

However, the protest, which began sporadically in Abuja, Kaduna and Kano, and was expected to grow into a big protest was shelved when the government intervened and held discussions with the organisers.

But AbdulAzeez insisted that the refusal by southerners to join in the protest was a misrepresentation “because long before the #ENDSARS protest, there were protests against insecurity in the North, which were coordinated by the CNG.

“Rather than queuing into the insecurity protests to give it a national voice, the South selfishly came up with the #ENDSARS protests that primarily targeted a particular unit of the Nigeria Police Force”, he stated.

He added that, “When, unfortunately, the #ENDSARS protests assumed a different face and turned into violent acts and violations against the nation’s defence and security assets and indiscriminate attacks on northerners, the CNG withdrew its protests to avoid exposing the North to greater dangers.

“Besides, I don’t see how those protests which were singularly meant to achieve the ending of SARS could have helped the northern situation”.