…As VP reportedly writes Buhari over his plan to run

A coalition of political groups in Northern Nigeria has endorsed the Vice-President, Professor Yemi Osinbajo, as their preferred choice for the 2023 presidential election. 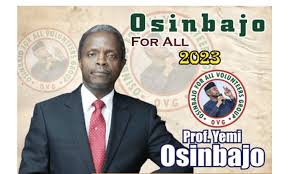 The coalition made their position known through a communiqué issued at a one-day joint conference on northern political participation and power shift, with the theme: ‘Northern Agenda: Our Real Solution’, which held at Arewa House, in Kaduna.

The group stated that after critical discussions and deliberations on political issues bordering on grass-roots political participation, Arewa/northern interest, larger interest, unity and peace of Nigeria, power rotation and the forthcoming general election, the conference came up with their decision.

In a related development, unconfirmed reports said the vice-president has informed President Muhammadu Buhari of his intention to run for president in 2023, according to reports. It is understood that Osinbajo made the move when he met with President Buhari on New Year’s Day.

According to a source in the Presidential Villa, “The vice-president did not want to go into the election year by hiding a plan which the president had probably already known about.

“Osinbajo said he was not looking to ambush and railroad the president into endorsing him and has long acknowledged that it might take uncommon fortitude to tilt the president’s support towards himself, according to the official who was present at the meeting”.

However, Prof. Osinbajo is yet to make any formal pronouncement as to whether he is going to contest for the presidential slot in 2023.