Vice-President Yemi Osinbajo has urged Nigerian professionals to jettison ethnicity, religion and ‘parochial considerations’ in making crucial decisions for the development of the country. 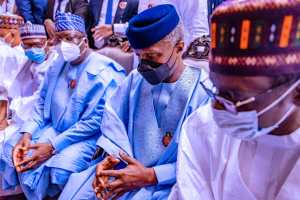 Osinbajo spoke at the All Progressives Congress (APC) Professional Forum, yesterday, at the Presidential Villa, Abuja, where the members brainstormed on sundry national issues.

The VP noted that only politics devoid of ethnicity and religious considerations could promote and facilitate development in the country.

The Forum, convened by former governor of Bauchi State, Isa Yuguda, with the theme: “The role of professionals in politics and nation-building”, was also joined by the former governorship candidate of the APC in the September 19, 2020 election in Edo State, Osagie Ize-Iyamu and Chief Moses Ayom, among other stakeholders under the platform of the party for the forthcoming 2023 elections.

Also, present at the Banquet Hall event were the immediate-past governor of Nasarawa State, Sen. Tanko al-Makura and Deputy Chief Whip in the House of Representatives, Nkiruka Onyejeocha.

The Vice-President stressed the need for Nigerian professionals to embrace politics that is driven by merit rather than throw up base considerations, especially as the 2023 election inches closer.

According to him, “One of the major advantages to our communities of having professionals in politics is lost if we do not recognise our role as merit-driven persons must be to fight the temptation of ethnic, religious and other parochial considerations in making crucial decisions for the development of our nation.

“There is no point having professionals in politics if these professionals are driven by ethnic, religious and other parochial considerations because the whole point of professionalism is that you are defined by merit and professional acumen.

“Nobody would place their lives in the hands of an incompetent doctor because they share the same faith or continue to patronise a dangerously inept mechanic because they belong to the same tribe. If someone tells me, for example, that the pilot who is to fly the plane that I am to go in is not a very good pilot, but he is from Ikenne, my hometown, I certainly won’t go into that plane.

“So, in the same way, we must especially refuse to be swayed by those whose sole argument for power is an appeal to sectional sentiments.”

Minister of State for Mines and Steel Development, Uche Ogah, reiterated the need for the professionals to begin to brainstorm on how to leverage on the solid foundation already laid by the President Muhammadu Buhari-led administration.

In his goodwill message, Ayom said that Nigeria under the APC was gradually moving from the previous state of professionals scavenging the streets for paid white-collar jobs to a more desirable position of breeding professionals who are creating wealth.