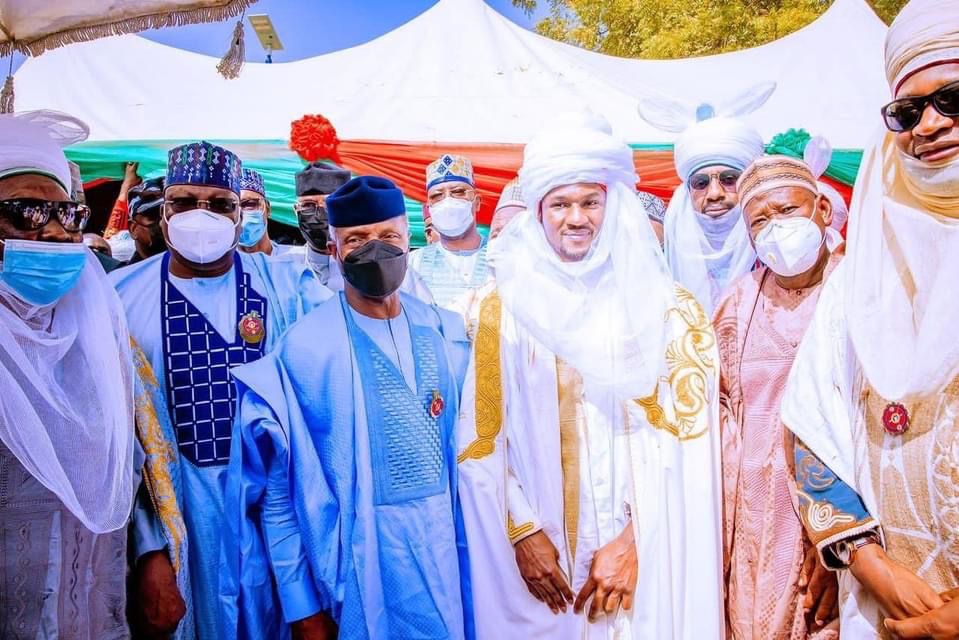 Speaking of the vice president, the Emir of Daura said, “We extend our appreciation to his Excellency, the representative of the President. He, (the vice-president) is a noble man who keeps his promises and a trustworthy person, who has so much patience and knows what to do at any given time”.

Speaking further, the Emir said, “He is a very good man; he is my favorite person. But, I always forget how to pronounce his name properly. He is a very nice person”.

After the president’s son was turbaned, the Emir explained that his installation is “a gesture of goodwill to President Muhammadu Buhari”.

He added: “The emirate has decided to give His Excellency, Muhammadu Buhari a token of appreciation from his hometown. Although we know that because of his age, he cannot come home and take up a traditional title; therefore, we asked him to give us his son so that we can install him as a district head in a portion that we all agreed to demarcate to give him as a district head and ruler.

“Bear me witness, my fellow rulers, it is that we don’t give titles to anyone because of fear or anything, we give the title to someone who will help the emir and help him cater for the ordinary people in his heart”.

Besides VP Osinbajo, other dignitaries at the event included the governors of Katsina and Kano States; the Senate President, Ahmad Lawan, Deputy Senate President, Ovie Omo-Agege and several other members of the National Assembly.

There were also members of the Federal Executive Council, (FEC), including the Secretary to the Government of the Federation, (SGF), Boss Mustapha, as well as other ministers.