As the search for peace in the Peoples Democratic Party (PDP) continues, the National Chairman of the party, Dr. Iyorchia Ayu, has now given a condition for his resignation if the stakeholders are adamant on his exit. 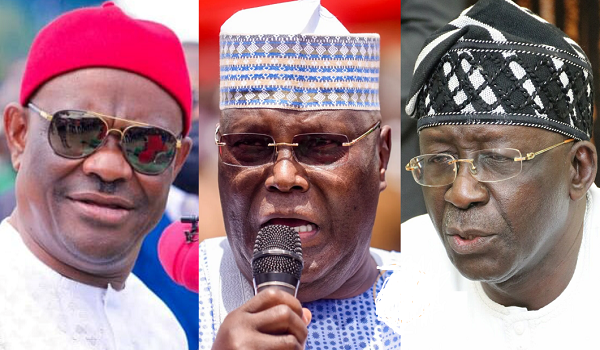 According to him, all members of the National Working Committee (NWC) from the South must swap their current positions with those from the North since the PDP presidential candidate, Atiku Abubakar, is from the North. However, Ayu’s proposal has been rejected by many party leaders who fear that their candidates in the NWC will lose their positions and influence.

One of those who stand to lose out if Ayu’s proposal on swapping of positions is accepted is Rivers State Governor, Nyesom Wike. His ally, Senator Samuel Anyawu, from the South-East zone, is the PDP National Secretary and head of the party’s national secretariat.

It was gathered that some party leaders have started making a U-turn to prevail on Wike and some governors to allow Ayu remain in office till after the 2023 presidential election. The party, sources said, has also been gripped by fresh tension over an alleged plan by some leaders to appoint Sokoto State Governor, Aminu Waziri Tambuwal, as the Director-General of the PDP Presidential Campaign Organisation.

Recall that Tambuwal stepped down for Atiku during the party’s presidential primary, and he is being tipped for the office of Senate President if Atiku wins.

Party sources are of the view that appointing Tambuwal, a northerner, as the campaign organisation’s DG at a time some southerners are already complaining about the North’s annexation of the party’s chairmanship, BoT chairmanship, presidential candidate and positions of chief spokespersons for team would not be in the PDP’s best interest.

Although some leaders suggested Oyo State Governor Seyi Makinde as DG, there were concerns that combining his own campaign for a second term with that of running the presidential campaign team would be too much of a burden. Some chieftains of PDP were said to be in favour of Wike as the Presidential Campaign Council DG to “heal wounds” in the party.

An investigation revealed that the crisis of confidence between Atiku and Wike, the fate of Ayu and other NWC officers, the choice of DG, the need for ethno-religious balance in PDP are responsible for the delay in composing the PDP Campaign Council. It was also learnt that these issues influenced the Board of Trustees decision to prevail on Atiku and Wike to close ranks on Wednesday and Thursday, in Abuja.

At the session with the Board of Trustees on Wednesday, Ayu said he was ready to sacrifice anything for the success of the party in the 2023 elections. It was also learnt that Atiku and Wike agreed to nominate separate teams to meet and iron out their differences. It was also learnt that the main planks of their talks were inclusion, equity, fairness and justice for all, especially the South.

The Thursday meeting was the first between Atiku and Wike since the PDP presidential candidate overlooked the Rivers Governor in his choice of running mate in favour of Delta State Governor Ifeanyi Okowa. Atiku said his decision was informed by the realisation that he needed a deputy he could work with amicably.