An amalgam of civil society groups and political actors have vowed to shut down Nigeria again, as they did nearly ten years ago if the Federal Government goes ahead with its plan to increase fuel and electricity prices in 2022. 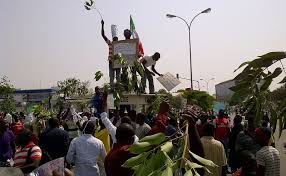 Recall that in 2012, forces opposed to a fuel price hike by the administration of President Goodluck Jonathan shut the country down for almost two weeks, in an operation codenamed: ‘Occupy Nigeria.’

Leaders of the then protests which crippled the country, as opposition elements, are now senior operatives in the President Buhari-led administration, which is seeking to upwardly adjust both fuel and electricity costs as done multiple times in the last six years of the administration.

The coalition, operating under the Peoples Alternative Political Movement, (TPAP-M), in a communiqué issued after a public meeting with allies, threatened to shut the country down again, as the anniversary of the 2012 shutdown draws near.

“The public meeting was very well attended by groups and individuals from across the country, including the affiliates of TPAP-M, the Coalition on NGO Networks in Northern Nigeria, Trade Union Congress, AUPCTRE, Campaign for Transformative Governance (CFTG), representatives of informal sector workers, women formations, and youth and young persons, including those who continue to play front line roles in the #EndSARS movement” the communiqué, signed by Comrades Omotoye Olorode, a Professor of Botany and Jaye Gaskia, reads in part.

The coalition further disclosed that “the public meeting was convened against the background of the unfolding and rapidly deepening crisis in the energy sector.

While asking Nigerians to prepare for Occupy Nigeria: Phase 2, the coalition remarked that, “January 2022 will mark ten years since Occupy Nigeria (The January Uprising) of 2012 that shook the nation and the ruling class to its foundation.

“When in January 2012, the GEJ regime unconscionably hiked fuel prices in the name of removing fuel subsidy, there was a justifiable mass outrage, which precipitated the January uprising, also known as Occupy Nigeria, where for more than two weeks, there were mass protests and across more than 55 cities and a mass general workers strike that lasted a week and paralysed the economy.

“Recall that the same reasons pushed ten years ago by the Jonathan administration, are still being pushed by the current Buhari administration as justifications for the fuel price hike.