A group, the Yoruba Appraisal Forum (YAF), has cautioned governors and other politicians from the southern region of Nigeria over the ongoing national debate arising from the resolutions of last Monday’s meeting of the Southern Governors’ Forum demanding for power shift to the region in 2023. 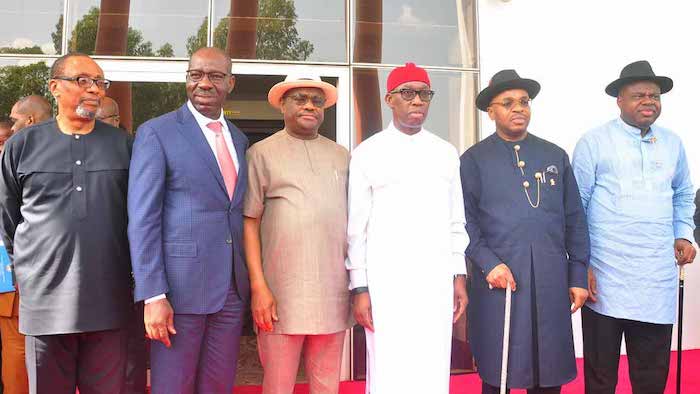 The group expressed concerns that the resolutions of the southern governors has generated tension in the polity, and alleged that certain actions by some powerful politicians and individuals from the southern region since the Lagos meeting of the governors could spark off “serious tension” amongst the different ethnic groups making up the Nigerian federation.

This is contained in a statement issued to newsmen in Abuja on Friday by YAF’s national coordinator, Adeshina Animashaun.

Part of the statement reads:

“YAF has observed a flurry of activities and desperate attempts by some powerful politicians and individuals to further aggravate the ongoing debate and eventually create tension in the polity ahead of the 2023 general elections. We have it on good authority that these powerful politicians and individuals have been on the throat, so to say, of some traditional rulers in the South-West states, in particular, to compel the royal fathers to convene a meeting and issue resolutions backing the decisions they took last Monday in Lagos.

“Similarly, various civil society groups in the South, YAF learnt, are being pressurised to meet and issue communiques supporting the Southern governors’ position on the various issues they raised last Monday in Lagos. The utterances of some of these groups have left so much to be desired as their statements on the issue border on threats to the rest of the country.

“YAF’s concern is mainly about the implications of this rash of veiled threats swathed in reactions and opinions coming on a daily basis from the groups and individuals from various sections of the country. We want to warn that this latest development is beginning to further heat up the polity and, knowingly or unknowingly, preparing the fertile ground for another round of protests and violence in the country.

“YAF believes that the recent peaceful atmosphere prevailing in different parts of the country and being enjoyed by the majority of Nigerians should not be threatened or disturbed by issues we can all resolve amicably as a united entity. Posterity won’t forgive us if we allow the ongoing brouhaha to degenerate to any untoward or unthinkable situation.

“YAF, therefore, appeals to Nigerians from all sections of the country to remain calm and allow peace to reign supreme throughout the nation. We should all eschew provocative statements and actions concerning the ongoing debate about Nigeria’s political future.

“It is YAF’s considered opinion that rather than to continue to bicker unnecessarily, Nigerians should see the bigger picture and espouse worthy causes that will ensure the continued survival of the Nigerian nation.”