Governors, under the auspices of the Progressives Governors’ Forum, PGF have paid a solidarity visit to Governor Muhammadu Inuwa Yahaya over the recent political skirmishes orchestrated by vested interest which led to the death of some innocent citizens and destruction of public property. 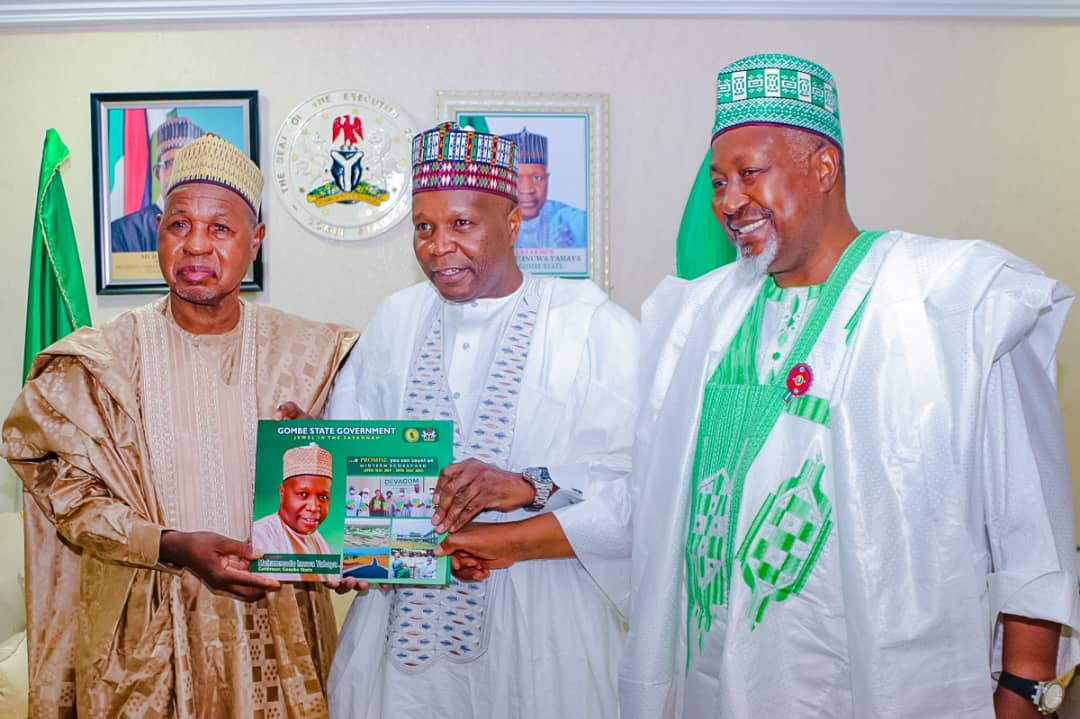 The PGF delegation, comprising of Katsina State Governor, Rt. Hon. Aminu Bello Masari and his Jigawa State counterpart, Muhammadu Badaru Abubakar, expressed solidarity with Governor Yahaya and commiserated with him, and through him, the families of those who lost their lives as well as the entire people of Gombe State over what they described as unwarranted political mayhem.

The leader of the delegation, Governor Aminu Bello Masari, who spoke on behalf of PGF chairman and Kebbi State Governor, Sen. Atiku Bagudu, commended Governor Yahaya for the measures he took to nip the crisis in the bud. 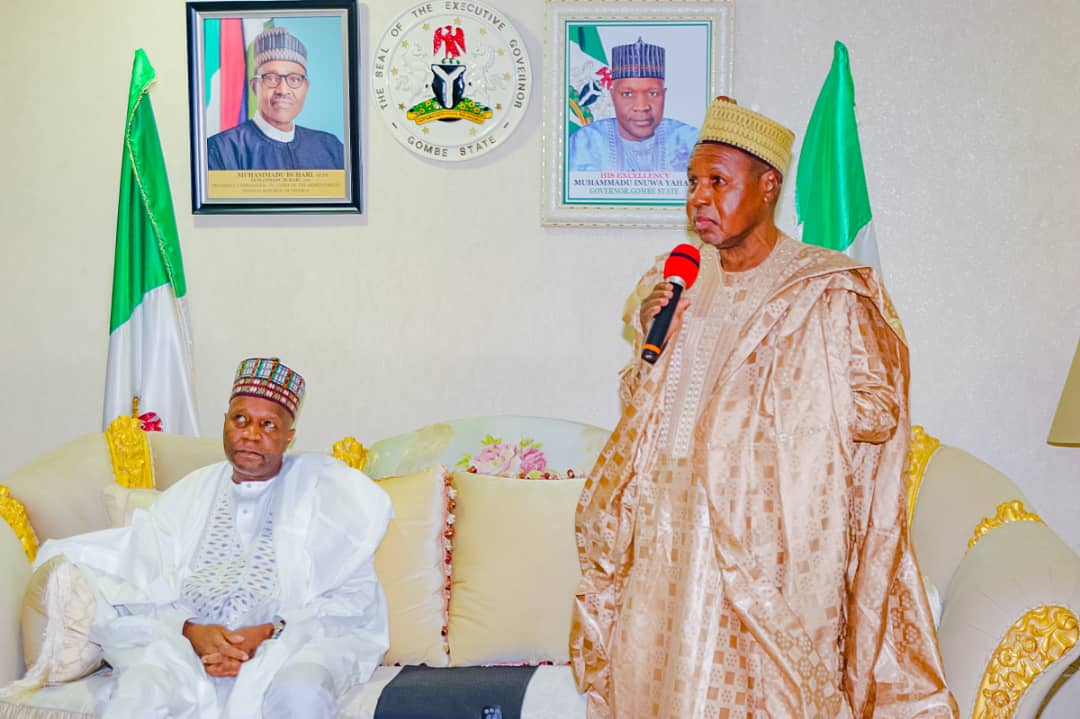 He appealed to political leaders, regardless of their party and interests, to demonstrate decorum, maturity and calmness in their activities.

“As political leaders, we have responsibility to protect lives and properties, so we shall not under any circumstances involve ourselves in promoting or supporting violence that will ultimately lead to injury or even death”.

Governor Masari also emphasised that political leaders are responsible for promoting democracy, adding that such cannot be achieved through violence.

“Politics is a means through which you have governors, presidents, councillors and other elective posts and where you do not have the right people in the right position by implication you do not have a good leadership and certainly where there is violence good people will run away”.

Governor Masari stated that he believes that politics is not in any way a violence, but also agreed that disagreement is normal in politics, which he said can be solved through dialogue amicably.

“My appeal here to all, not only people of Gombe State, but to politicians across Nigeria that we should be conducting our politics in a harmonious and understanding manner because political violence contravenes APC ideals; that is why we are taking steps to intervene to ensure peace and harmony”.

In his response, Governor Muhammadu Inuwa Yahaya expressed gratitude to his colleagues for identifying with government and people of Gombe state at this trying time.

“I know the principles and ideals on which our great political party is built and same with us as members of progressives governors forum and so is Mr. President too and we are all doing our best to ensure that our people live in peace and tranquility so that we can achieve the goal and interest that we are all yearning for”.

“The primary responsibility of every government is to provide security and safeguard lives and property, once we fail in that it means we fail in our duties and at the end, our creator will judge us for all our misdeeds”.

Governor Inuwa Yahaya expressed strong conviction that a lot needs to be done to ensure that despite the challenges; politics instead of dividing us should rather join us together to strengthen us to contain other challenges.

“For you to have seen the pains we are going through at this point in time and for you to have abandoned what you were doing in your various states despite your tight engagements just to come and Commisserate with us means a lot, and that goes to show that you are really our brothers”.

He further noted that his government will do anything possible to ensure that peace that Gombe is known for is restored and maintained.

“The relative peace being enjoyed in the State in spite of our central position in the North-East is a result of strategic planning. So, we’ll not toy with that. We shall continue to take all necessary steps to ensure that peace and tranquility continue to prevail in Gombe State”. 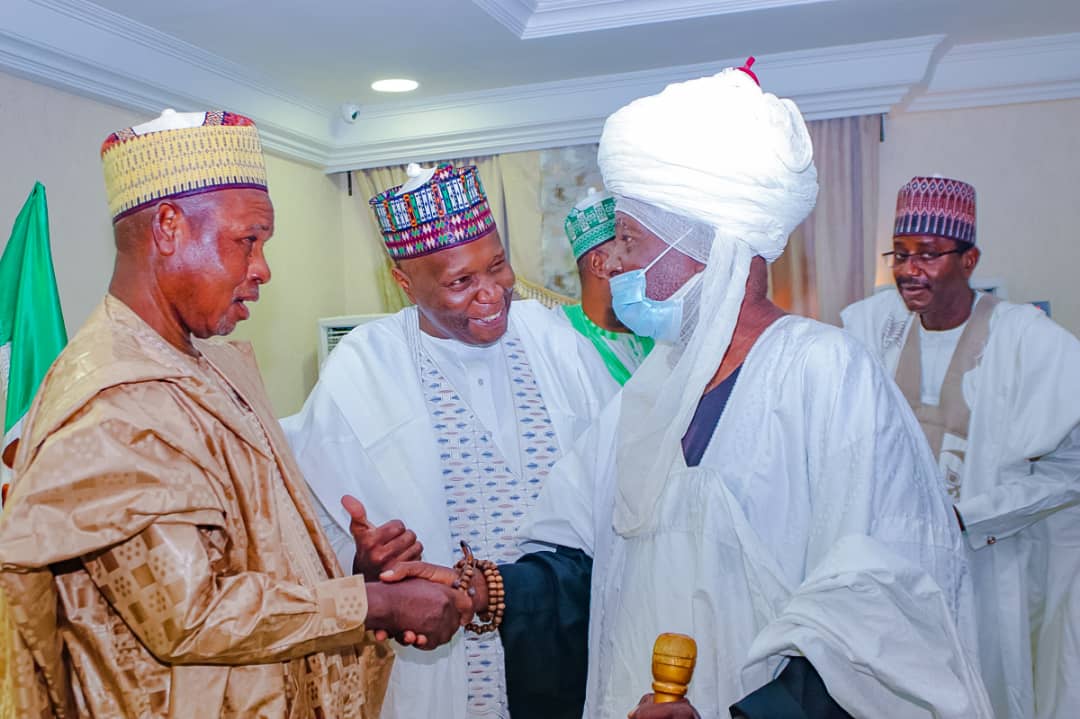 During the visit, Governor Inuwa was joined by the Deputy Governor, Dr. Manassah Daniel Jatau, Speaker Gombe State House of Assembly, Hon. Abubakar Mohammed Luggerewo, Majority Leader and other members, the Secretary to the State Government, Professor Ibrahim Abubakar Njodi, Commissioners and Special Advisers as well as Royal fathers, including the Mai Kaltungo, Emir of Dukku, Lamido Akko and Senior District Head of Gombe among others.