The ‘repentant’ leader of the gang of bandits that abducted over 300 schoolboys in the Kankara and recently surrendered some weapons, Auwalun Daudawa, has disclosed how easy it is to get a gun.

Recall that Daudawa and six of his lieutenants recently surrendered 20 AK-47s, ammunition and a rocket-propelled grenade (RPG) launcher to the Zamfara State government. 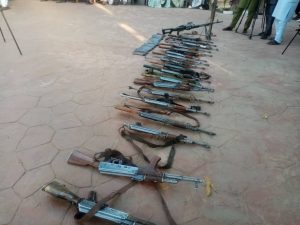 Speaking on how he got his arms, he said, “I got it around me. It is easy to get a gun. It’s just like you going to buy bread”.

Daudawa noted that the injustice he had experienced made him delve into banditry. “It is because of injustice; injustice in the sense that you had your own property and took care of your family; then the government would now send officials to cart away everything while I have family to fend for,” he said.

“What would I do? Am I expected to survive on sand? I had a herd of cattle which I inherited from my parents, but operatives were sent to take them from me and brought here (to Gusau). So I was challenged to sit up too”, he narrated.

Recall also that Daudawa and his gang had on December 11, 2020 invaded Government Science College, Kankara around 11 pm, shooting indiscriminately to scare residents. The operation led to the disappearance of over 344 students.