Rivers State governor, Nyesom Wike, has alleged that Ogoni leaders are the problem of Ogoniland. 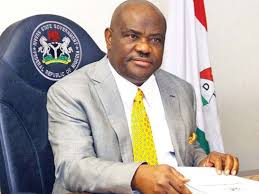 The Governor, who was speaking at the 30th Ogoniday celebration in Bori, the Khana Local government area of Rivers State on Tuesday,
accused some Ogoni people of selling themselves out, adding that they have turned the Ogoni struggle into a money-making avenue.

Governor Wike advised Ogoni people to learn to love and protect themselves the same way he has been protecting Rivers people.

He also claimed that the Ogoni people attempted to kill the political career of Senator Magnus Abe because he wanted to be Governor, saying, “The problem with Ogoniland are these people (pointing to Ogoni leaders).

“Every day, Ogoni day; what is Ogoni day when you have gone to sell yourselves out?”