Senate President, Ahmad Lawan, has accused the media of instigating the public against federal lawmakers. 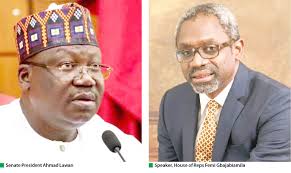 Lawan stated this in Abuja, yesterday, at a programme organised by the National Institute for Legislative and Democratic Studies, (NILDS).

Presenting a paper, titled: ‘Legislature, Legislative Mandate and the People – The Reality and Public Perception’, at the maiden Distinguished Parliamentarians’ Lecture, 2021, the Senator representing Yobe-North maintained that the narrative of jumbo pay and expensive cars for legislators was skewed against members of the National Assembly. He claimed that Nigerians do not raise eyebrows over the lifestyle of Ministers in the Executive arm of government.

According to him, “The argument against the purchase of official vehicles for legislators is at best counter-intuitive, and at worst, malicious and intended to turn the public against lawmakers. If civil servants from the rank of an assistant director and above are entitled to official vehicles and some ministers have convoys of cars, why is the allocation of a Toyota Camry for members of the House of Representatives and a Land Cruiser to senators such a hideous proposition?”.

The Chairman of the National Assembly also picked a hole in the argument that remuneration of the lawmakers was high, as he disclosed that senators are paid N1.5 million and members of the House of Representatives N1.3 million as monthly salaries, adding that a senator earns N13 million quarterly to run office expenses.

Secretary to Government of the Federation, (SGF), Boss Mustapha, who represented President Muhammadu Buhari, commended the Director-General of NILDS, Professor Suleiman, for the initiative to organise the public lecture and urged him to sustain it.

In his opening remarks, Professor Suleiman informed the participants that the bi-annual event would remain a platform for cross-fertilisation of ideas.