Eminent Nigerians, including the Sultan of Sokoto, His Eminence, Abubakar Sa’ad III and former President, Olusegun Obasanjo, have warned that except the Federal Government changed its attitude towards the issues of marginalisation, and also fix the country’s failing economy, the nation will continue to suffer its insecurity challenges. 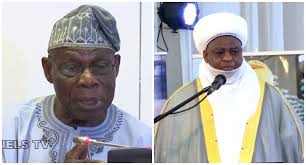 The duo gave this warning in a communiqué it issued on Wednesday, at the end of an inclusive security dialogue, jointly organised in Abuja by the Global Peace Foundation and Vision Africa.

They further warned that Nigeria would be postponing doomsday if the government continued to ignore the youth and the educational sectors in its national development programmes.

The communique further reads in part: “High prevalence of insecurity in Nigeria is driven largely by social Injustice and a failed economy, hence fueling continued agitation by the country’s young alienated generation. Government must act sincerely as an unbiased arbiter to address insecurity headlong. Hunger and starvation in the land will get worse, as continued violence and insecurity make our farms unsafe for families whose basic sustenance is dependent on their yields from the farms.

“Government at all levels must revisit and show a sincere effort at understanding the core issues of dissidence and self-determination in Nigeria, rather than incarceration, bullets and counter-attacks as the government responds to agitations and unrest. We must draw upon our religious traditions and our understanding of what is best for our people”.

“Government, as a matter of urgency, must convene a national reconciliatory conference where we can all address the underlying issues of our challenges in order to quell the mistrust-fueled agitations and crisis before the entity called Nigeria collapses. We call on the Government to begin a process of constitutional review in order to amend and rework it, drawing on our previous constitutions, amongst other things, to synchronise and harmonise the laudable principles they embody. This will ensure, not one-off solutions, but lasting change”.