As Nigerians cry out over excruciating hardship occasioned by the harsh economy, insecurity and hikes in the prices of foodstuffs, Special Adviser to the President on Media and Publicity, Femi Adesina says President Muhammadu Buhari’s footprints are visible in many areas and will remain indelible.

Adesina disclosed this in a published article titled: ‘Buhari’s footprints from home to Diaspora’, which he shared on his official Facebook page on Thursday. According to him, some Nigerians have afflicted themselves with willful blindness, deafness and amnesia just to erase the footprints of President Buhari.

He said, “Unless you are the discerning type, listening to public discourse today, you would think the only thing happening in the country is insecurity. However, the footprints of President Muhammadu Buhari are visible in many areas of our national life, and will remain indelible. At least for those who are fair, and open-minded; not those who have afflicted themselves with willful blindness, deafness and amnesia”.

Adesina also mocked the leader of the Northern Elders Forum, Professor Ango Abdullahi’s recent criticism of President Buhari, saying he never voted for the President in the first place. Abdullahi was reported to have said, “We bear scars from governance by the one we substantially voted into power twice…Northern votes will be cast by people who are now… more discerning”. 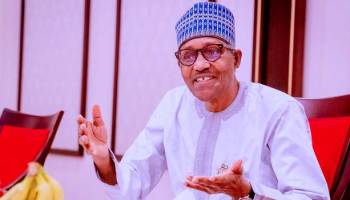 However, reacting via a Twitter post yesterday, Adesina wrote, “But the Professor forgets; he never voted PMB. He had his candidate, and they were both beaten black and blue”. Recall that Adesina had in the past described the Northern Elders Forum led by Abdullahi as “a mere irritant”.

At a book launch in Kaduna on Thursday, Abdullahi also said, “We (Northerners) will participate in all political and electoral activities as equals, and concerning other Nigerians who respect us. In the North, we consider attempts to create divisions and conflicts around religion as hostile acts.

“While we differ in faith and ethnicity, history, geography, and our experiences in living as Nigerians have created roots and bonds that cannot be destroyed by desperate political gambits. The North will participate in all political and electoral activities as equals and with respect to other Nigerians who respect us. We want leaders who will lead with integrity, competence, compassion and the fear of God”.

According to Abdullahi, northerners will not “support a candidate that fails to convince that he will radically improve the quality of governance and the integrity of leaders”, adding that “Northerners will not be intimidated into making choices that do not improve the chances of real changes in their current circumstances”.