Stakeholders in the maritime industry have challenged the re-appointment of Ms. Hadiza Bala-Usman as Managing Director of the Nigerian Ports Authority, (NPA), by President Muhammadu Buhari for a second and final five-year tenure.

In a suit, filed at the Federal  High Court, in Lagos, the plaintiffs, led by Elder Asu Becks, Mr. Tompra Abarowe and Mr. Miebi Senge are praying that the Court set aside the re-appointment of Hadiza Bala-Usman as the NPA boss. 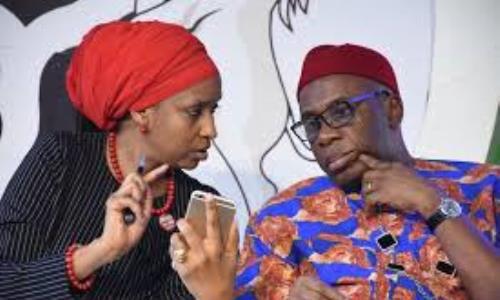 Recall that President Muhammadu Buhari has approved the re-appointment of Hadiza Bala Usman as Managing Director of the NPA, for an additional five-year tenure.

Also approved was the reconstitution of the Non-Executive Board of the NPA, with Emmanuel Adesoye (from the South-west zone) as Chairman. Other members of the Board are Ekenyem Nwafor-Orizu (South-East zone), Akinwunmi Ricketts (South-south zone), Ghazali Mijinyawa (North-East zone), Mustapha Dutse (North-West zone), and Abdulwahab Adesina (North-Central zone).

The respondents in the suit are President Muhammadu Buhari, the Minister of Transportation, Rotimi Amaechi Hadiza Bala Usman and the NPA Board chairman, Emmanuel Adesoye.

The plaintiffs submitted  that the court should  determine whether the president, who is the 1st defendant, has the legal right, under Section 2 and 10 of the NPA Act 2004, to lawfully and prematurely  re-appoint Hadiza Bala-Usman as Managing Director of the NPA 6 clear months before the expiration of her existing tenure of office.

They also seeking that the court declares the President’s action in the composition of the Board of the NPA is not illegal, wrongful, unlawful, unconscionable, null and void and of no effect whatsoever.

They are also seeking the court to declare that the President lacks the authority and power to prematurely re-appoint Hadiza Bala-Usman as the NPA MD six months before the expiration of her existing tenure of office.