Vice-President Yemi Osinbajo, (SAN), has urged Nigerian elites to work in consonance for the nation. 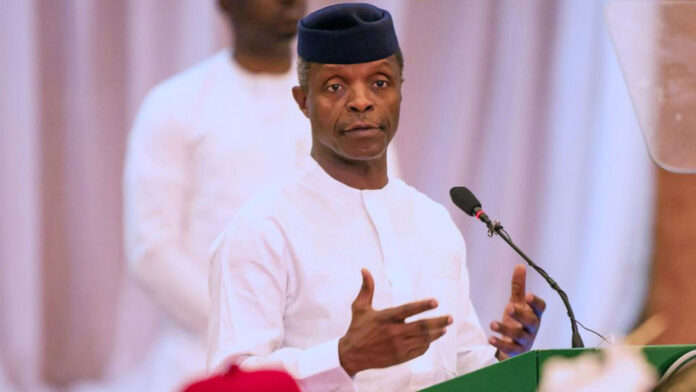 Professor Osinbajo, in a speech he delivered at the Leadership Conference and Awards in Abuja, on Thursday, stated that despite the nation’s current challenges, citizens must avoid drifting towards vices that appeal to darker impulses but instead counter fear and foster solidarity.

He challenged the elites to act in solidarity and build a consensus to settle contending issues in the nation and enlarge the circle of opportunity, especially for the young people.

He said that the external reasons Nigerians cited as reasons for problems could not thrive without severe internal weaknesses in the society.

According to him, the chief weakness is a human one – the elite, the political, economic, and religious elite.

“An elite that has so far proved to be socially irresponsible; one which either by selfishness, negligence or ignorance or a lack of self-awareness has so far been unable to build the institutions and more importantly, the social and political consensus upon which a just and orderly society can stand.

According to him, first, there is need for consensus building; consensus building is essentially about finding an acceptable ‘middle ground’ among contesting options to the resolution of issues, saying when properly agreed upon, it leads to harmony, equilibrium and stability, and generates mechanisms for pacification in political crises and conflicts.

The V-P said that the second was mediating elite competition and conflict, adding that in considering the role of political and non-political actors in stabilisation and consensus building, threat to peace and safety emanating from society itself must be addressed.

Osinbajo further said that the task before the elite was that of renewing the social contract, creating more inclusive institutions, growing the economy, and generating opportunities for the population.

“The media elite must recognise that they have a responsibility to exercise discernment in the deployment of their platforms and must reflect upon whether they are amplifying the most insensate, intemperate and incendiary voices in our midst while marginalising voices of reason.

“The political elite must accept, through policies and actions, that the purpose of power must be to better the lives of those we serve and give our young ones great hope for the future”, he said.

He said that in times of crises, people learn and relearn lessons in solidarity and in the value of pulling together.

Osinbajo further said that the old rigid dichotomies between the state, the market and civil society no longer applied.

The vice-president said he remained unyielding in his belief that Nigerians would prevail over current adversity by the strength of their togetherness.

“The recognition that the system is not working optimally for many of our people should inspire a broad-based movement for reform that works to recalibrate the present order and attune it more to the aspirations of our people.

“This is a risk that we cannot afford to take as a nation”, he declared.