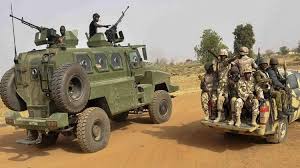 He said the troops came in contact with the terrorists during a clearance operation at an illegal market they operate at Gallo Makawari, a village in Damasak.

Nwachukwu says, the terrorists were overpowered by troops and forced to disperse in disarray, leaving behind their weapons, after three of them were killed.

The weapons include one AK 47 Rifle, one truck, two motorcycles, four empty magazines and rounds of 7.62mm ammunition, among others.