Nigeria’s electoral system reform is progressing. It has made some positive dramatic moves up the ladder of democratic tenets since 1999 when Nigeria returned to civil rule. But there are pundits who believe the progress should have been faster than what we have witnessed thus far.

You may want to disagree with them. But the recent debate on the amendment of the electoral act, especially clause 52(2) of the bill that prescribes that the Independent National Electoral Commission INEC might adopt electronic voting and transmission of results where practicable, is a pointer that the progress is not fast enough.

The bill also proposed that the commission may also adopt any other method of voting in any election it conducts as it may deemed fit. It further states that voting at an election and transmission of results under the Bill shall be in accordance with the procedure determined by the Commission.

But the lawmakers made near nonsense of that bill and practically took out the INDEPENDENT in INEC by throwing out the electronic transmission of elections results as advocated for and spoke in favour by Nigerians during public hearings.

While the Green Chamber House of Representatives, the lower of Nigeria’s National Assembly may be said to have handled it with certain political and legislative maturity, not so the Red Chamber Senate muddled up everything and practically booted what majority of Nigerians are rooting for.

The Senate was divided at plenary over the amendment. The division arose with the senate clause-by-clause consideration of the recommendations of its Committee on INEC.

That was sought by Senator Sabi Abdullahi while President of the Senate, Ahmad Lawan passed the gavel in support of the amendment.
Senator Bassey Akpan could not have any of that and called for an amendment to retain the initial recommendation of clause 52(2) arising from the adoption of Sabi’s amendment proposal. This resulted in session of heated verbal exchanges amongst the senators. Sabi’s amendment did not stand well with some senators.

The Senate President called for a closed session, after which
Sen. Enyinaya Abaribe called for division, haven cited order 73, which allows senators to contest the ruling of President of the Senate.

The senators took turns to vote “Yes or No” on retention of the clause for electronic voting process. At the end of the open voting process, senators who voted for the amendment to the clause won, haven recorded the highest number of votes. Those who voted for the electronic transmission option of amendment, were 52, and those who voted against were 28, while 28 other senators were absent. Yes you heard that right; 28 out of 109 Senators elected to represent their people were absent during a critical national issues on the civic responsibilities of Nigerians.

Some of the senators, who voted against the proposal for retention of the earlier provision on the bill, gave the excuse that Nigeria was not ripe for electronic voting and transmission of results. The argument of some who voted NO was that there was no network coverage of some parts of their constituencies. But the question on many lips is; where is the place of utilising satellite system to get this done where the network providers may not have coverage? Or why not allow the bill to pass and use that as an excuse to demand for network coverage of such places. Even those who cited insecurity.
For those who cited insecurity as an excuse, as valid as that may sound, the demand for the utilization of the satellite would nullify that excuse too as lame.

Majority of the Senators, especially of the ruling All Progressive Congress APC, voted against the bill. This contradicts the aspirations of majority of Nigerians who voiced their support for the electronic transmission of election results during public hearings.

The House of Reps could be said to have fared better with the invitation of a representative of the National Communications Commission NCC, Ubale Maska to throw more light on the network coverage of the country.

Responding to inquiries from lawmakers, Ubale Maska told the House that in 2018, the commission conducted an analysis of the 119,000 polling units in the country, and according to him, about 50.3 per cent of the polling units have 3G and 2G network coverage, while parts of the remaining 46.7 have only 2G and the rest do not have coverage at all. This however contradicts an earlier finding by the same NCC which says 2G and 3G coverage of the country stood at above 90 percent.

Following Ubale’ presentation, after the House Minority Leader Ndidi Olumelu resisted the Deputy Speakers’ arm twisting of the clause by clause debate, with particular attention to section 55(2), the minority members of the lower chamber staged a walkout, leaving just the All Progressive Congress APC members who amended the section to empower the Nigerian Communication Commission (NCC) to determine suitability of network to conduct electronic election processes with approval of the National Assembly.

This also turned that the recent stakeholder meetings and public hearings on the matter, by federal legislators as mere jamboree which thwarts and sabotage the will, desire and expectations of Nigerians for credible elections that meet international standards, aside denying INEC the independency in line with the 1999 constitution as amended.

Section 78 of the Constitution provides that ‘The Registration of voters and the conduct of elections shall be subject to the direction and supervision of Independent National Electoral Commission.” While the Third Schedule, Part 1,F, S.15: says INEC has power to organise, undertake and supervise all elections.

The arguments of those opposed to the bill for electronic transmission of election result is also in sharp contradiction of the recent Edo and Ondo Governorship elections where same process used was adjudged to be outstanding and aided the credibility of the elections.

We know some politicians being who they are, would always like to manipulate electoral process to their whims and caprices. But to deny Nigerians a transparent process, especially with INEC coming out to say it has the capability to transmit these results electronically nationwide, speaks volumes of how politicians always undermine and thwart electoral reforms, development, growth and deny the electorates the power to elect leaders of their choice.

The electoral reforms carried out by Professor Attahiru Jega during his tenure as Chairman of INEC culminating in the Card Reader, gave us fairly transparent, free, fair and credible elections in 2015 with attendant less post-election cases. But by 2019, unscrupulous politicians found their ways around the card readers and did all sorts of things.

While we urge INEC to be solely guided by National interest and desire of Nigerians for a credible, free and fair elections in using its constitutional powers, and in deploying of error free technology to conduct elections, the commission should determine in any part of the country, where electronic transmission is not possible, if there is any, it should by regulations determine the appropriate thing to do to assert its independence.

But after all said and done, and after what the majority of the National Assembly members have done which contradicts the aspirations and yearnings of majority of Nigerian electorates, the buck stops on President Muhammadu Buhari’s table.

Would President Buhari assent to a bill that doesn’t support free, fair, credible and transparent election in line with international best practices which majority of Nigerians yearn for, or would he go with the few lawmakers who booted what Nigerians are rooting?

Time, that inimitable being, would the only one to tell.

(This was first written for Liberty Radio 91.7 FM Kaduna and Liberty TV Viewpoint/Candido). 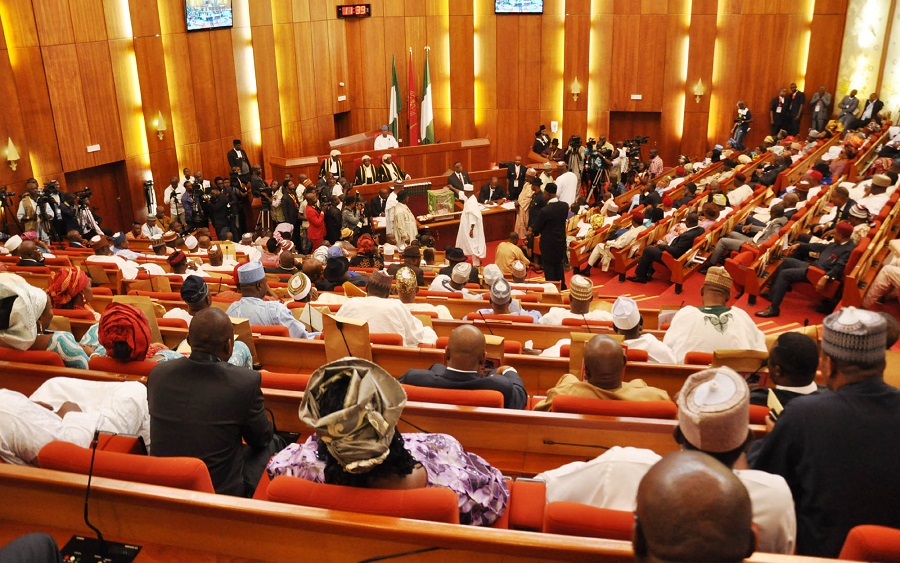