The Chief Imam of Legislative Quarters, in Apo, Abuja, Sheikh Muhammad Nuru Khalid has chastised the politicians who declared that they were ready to die for Buhari in 2015, saying they are weeping today because of him. 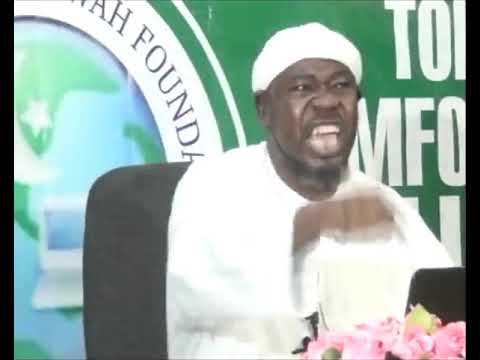 The fearless, outspoken cleric, who is noted for speaking the truth to the authorities, stated this in a published interview at the weekend, while bearing his mind on the challenges of insecurity challenges bedeviling the country, farmers/herders’ issues, crises in Plateau State, among others.

He blamed some politicians have a hand in the problems bedeviling by the country and also said some religious leaders are also inflaming the country’s problems.

His words: “Even they (politicians) have affirmed it. You find them telling Nigerians from time to time, directly or indirectly, that they are the problem of the country. The ruling party will be accusing the opposition and the opposition will be counter-accusing the ruling party of negligence or directly or indirectly sponsoring or helping insecurity. So, who do we blame? Politicians. They have to come together and change the narrative.

“Nigeria is not moving in the right direction. The unity of Nigeria was kept at a manageable level before he (President Buhari) came and our assumption was that he was going to cement the unity; that he was going to deal with insecurity. But what we have today is that some people have hijacked some parts of the country. Bandits have hijacked some local government areas in Zamfara State. They are also doing what they like in parts of Sokoto State.

When asked what he would advise Presidnt Buhari as solutions to the country’s nagging problems, especially insecurity, the fiery cleric said that the president should first identify those who are behind these atrocities and have them punished.

“He (Buhari) should prosecute some highly-placed people that are behind these current atrocities. Let him, as he said during his campaigns, draw the line. Had he drawn the line and looked at his government, he would have caught those committing atrocities inside his government.

He further stated that he is not in support of rehabilitating the repentant bandits but of deradicalising them. He said, “These people are radicals; they have radical thoughts. That is what took them out of the society in the first instance. They say they have ‘repented’ but what was the motive? Why did they repent? We have to know that first. Most of them repented because they didn’t have food but their radical idea is still there. They are abnormal human beings.

“If you want to reintegrate them into the society, you have to deradicalise their thoughts so that they will become normal human beings. This is the first stage.

On what could bring about a solution to the farmers/herders clashes, whereby President Buhari recently said the government was going to ‘retrieve’ some grazing routes across the country, he said the President’s action could bring a final solution but the course of action on the part of the government is not the way to go.

“By knowing that every Nigerian deserves equal treatment and government office is a responsibility before it becomes a right. If you did not discharge your responsibility and you taking your right from the government, you are being dishonest and thereby promoting injustice.

“Thinking of what to do for the government and not what to take from the government should be the attitude of Nigerians. If Nigerians will agree that we are all equal in opportunities and rights, then Nigeria will be united and peaceful”.

“We lack that caliber of politicians in Nigeria except for very few exceptions. We want to have many of them, so that Nigeria can be great again”, he stated.