…Says ‘Tinubu 2023’ is the reason behind Yoruba nation agitation

The National President of the Yoruba Welfare Group, Comrade Adegoke Alawuje,
has revealed that those who are against the coming of Asiwaju Bola Tinubu in 2023 are the brains behind the orchestrateded agitation for the Yoruba nation and many other crises in Yoruba land. 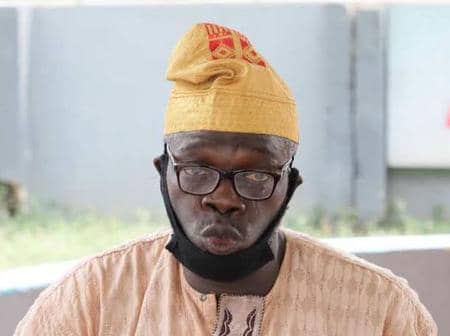 Comrade Alawuje made the submission at the weekend, when he formally responded to the arrest of the self-atyled Yoruna nation agitator, Sunday Adeyemo, a.k.a Sunday Igboho, in the Republic of Benin.

Recall that Sunday Adeyemo had been declared wanted by the Nigerian government for treason, treasonable felony, terrorism and illegal possession of firearms.

Alawuje warned the trouble makers to be careful, saying crisis or agitation is not what the Yoruba need at present.

“The bitter truth many of us still do not realise is how to prioritise and go about pursuing our major needs in Yoruba land. We stop the untoward attitude of clandestinely fueling crisis and turn a new leaf if we truly want to liberate the Yoruba land. This approach did not favour us in 1963 during “Operation Wetie”, it failed us in 1993 and it can not be the solution now.

“We must tell ourselves the bitter bitter truth of life. Call me any name you like, I still believe in saying the truth, defend the truth, propagate the truth and prepare to die on the part of the truth”.

Alawuje insisted that those who have voiced opposition to the Tinubu 2023 project are behind the succession plan, and are the ones who pushed Igboho to his recent predicament.

He wondered why those who are claiming to be the real friends of the Yorubas would take the path of the enemies by turning those tribes who have extended trust, friendship and love to the Yorubas into enemies.

He also wondered why those who know the truth are afraid or refusing to say it.

He further said the Yoruba Welfare Group believes in one and indivisible Nigeria where Yoruba interest is not compromised, but said Yoruba must-own and personalise the current challenges of the country rather than run away from them.

He posited that seeking for self determinations at this time will only destroy the Yoruba chances of becoming the president of this country.

Asking rhetorically, Alawuje said, “If there was no marginalization during former President Goodluck Jonathan’s government when those who occupied every meaningful office in Nigeria from the South are non-Yorubas, why should anyone cry marginalisation now, when Yoruba sons and daughters are prominent in government, some of us refuse to be manipulated by such political excuse.

“Be told, some of us know your major reason for bringing the present agitation, and be told it will not work”, he said.

YWG President stressed that the Progressives have never been on the same political page with the likes of Prof Banji Akintoye who he described as a tribal irridentist.

He said it’s the same reason real Progressives can never embrace the same ideology with his political agenda, hidden under the rubbles of “Oodua Nation”.

He advised Prof Akintoye and his collaborators to channel their frustration and agitation to meaningful endeavours that will empower Yoruba youths and put food on the table of an average Nigerian, urging them to stop fomenting trouble and beating the drums of war.

Alawuje insisted that if the two groups – the Progressives and the trouble makers are not on the same road, they can never end their journey in the same destination.

“Again, why must it always be that, at all times when the power is about to shift to Yoruba land, that some unscrupulous ones will just rise for no reason, to scuttle his chances.

“Their antics won’t work this time around. We are the ‘seventy per cent who do not support their agitation and we are just looking at all their dramas”, he stated.

Alawuje said he knows the undisclosed plans and understands why the agitators do not want Tinubu to rule Nigeria.

He said those who are being carried away with the “evil plan” will soon know the reason for trying to block the former govermor of Lagos State from becoming president.

YWG President said the love and unity of the Yorubas is the reason he will not expose the “evil agenda” of the trouble makers, saying exposing them now may lead Yoruba land to a protracted crisis whose end cannot be predicted.

Alawuje reiterated that YWG remains a good friend of Sunday igboho but knows his approach will not give Yoruba land the victory it deserves.