The National Leader of the All progressives Congress, (APC), Bola Ahmed Tinubu, yesterday revealed his intention to contest the 2023 Presidential election under the platform of the APC. 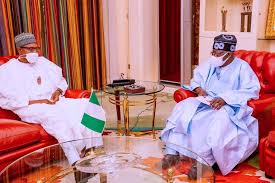 Tinubu made his declaration while briefing State House correspondents after he met with President Buhari at the Presidential Villa in Abuja.

He, however, declared that he has yet to inform Nigerians of his intention to succeed the President. It was however not clear if the President had given him the nod to contest.

According to him, the President is a democrat and therefore, has not asked him to stop the pursuit of his ambition which for him is life-long.

The APC leader and former governor of Lagos State stressed that he has the confidence, vision, and capacity to build on the foundation laid by President Buhari to turn around the fortunes of the country.

When he was asked what it feels like to be in the presidential race with the Vice-President, Professor Yemi Osinbajo, who has also been tipped to succeed the President, the Asiwaju declined to give a definite response, saying he would not speak about individuals.

On his manifesto for Nigeria, the APC leader said Nigerians should wait as he was still consulting and could not release his manifesto yet.

The APC national leader also rejected claims in some quarters that he should remain a kingmaker and not venture into the race as a king.

Speaking on the direct primaries and the convention, Tinubu called for a review of the position of the National Assembly and that of the President. On when it will be appropriate for the convention to hold, Tinubu said the onus lies with the President and the party leaders to decide.

While stressing that he was unwavering in his ambition to become president, he gave the assurance that the ruling party’s national convention would hold properly.

Recall that the President had during his last nationwide interview, said he was holding his choice close to his chest, because, according to him, “they may kill him if I choose my successor public”.