The Turkish Foreign Ministry has strongly condemned the events unfolding in Myanmar on Monday, calling for the release of detained top officials and for compliance with the disputed election results.

Some other members of Myanmar’s ruling party were also detained.

Myanmar’s military earlier vowed to “take action” against what they say were voter fraud in the Nov. 8 election, which was won by Suu Kyi’s National League for Democracy.

“We are deeply concerned about the military coup in Myanmar and strongly condemn it.

“We look forward to the immediate release of all elected leaders, politicians, and civilians, who were reportedly detained.

“We call for the convening of a new parliament in Myanmar as soon as possible and to remove the obstacles posed to elected leaders and democratic institutions,” the ministry said in a statement.

Turkey also expressed hope that the recent events in Myanmar would not worsen the situation of the Rohingya Muslims living there in difficult conditions. 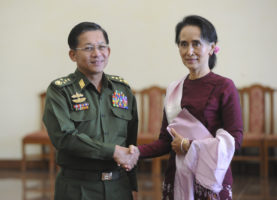