The controversy surrounding the causes of insecurity and killings in Imo State, has taken a new twist as a former governor of the state, Rochas Okorocha, has openly accused incumbent governor, Hope Uzodimma, of instigating the killings of a former presidential adviser, Ahmed Gulak, some traditional rulers and over 140 innocent people during the unknown gunmen reign. 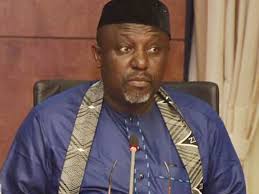 Dismissing Uzodinma’s recent stakeholders’ meeting as an exercise in futility, Okorocha wondered why his legacies, which impacted positively on the lives of the people were being attributed to the Uzodinma administration.

According to him, the incumbent governor was also making every effort to drag his hard earned reputation in the mud through baseless and groundless allegations.

Okorocha, who appealed to the Inspector-General of Police, Usman Alkali Baba to investigate his claims, also challenged the governor to explain to the world, why he failed to mention names of sponsors of banditry, kidnapping, killings and other forms of criminality in the state at the stakeholders meeting in Owerri, the State capital, on Tuesday.

Okorocha decried the growing insecurity bedeviling the State and challenged the governor to tell Imo citizens the truth about his secret security outfit code-named: “Hopism Security Forces (HSF)” and Ebubeagu, an organ he alleged master-minded several killings in the State.

Okorocha, who also challenged the governor to unmask his killer squad (HSF), which comprised of security agents and were unknown to the Inspector General of Police and the Chief of Army Staff, with him as the Commander, his chief security officer as coordinator and his special adviser on special duties as chief organiser.

He also stated that as a founding member of the APC, he could not leave the party for newcomers, adding that he was done with any other elections except the presidency, which he was presently pursing.

He, however, described Uzodinma as a paid agent commissioned to frustrate his presidential ambition next year.