The ten unfortunate victims of yesterday’s armed bandits attack in Amarawa village, in Illela local government area of Sokoto State, have been buried. 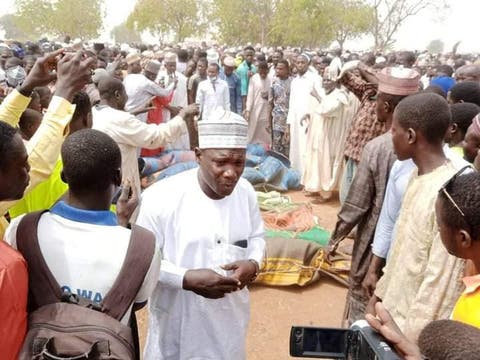 Recall that armed bandits attacked Amarawa village yesterday, killing ten persons while others sustained injuries. It was gathered that the gunmen, who stormed the village on motorbikes, kidnapped a wealthy businessman but the villagers tried to free him.

Picture Caption: One of the locals killed in the attack

According to the British Broadcasting Corporation, (BBC) Hausa service report, the gunmen had warned the locals to stay away but they refused and attempted to free the man.  The Police in Sokoto had confirmed the attack, but told the BBC Hausa they could not give details as investigation is on-going.

Meanwhile, the dead have been buried while those who sustained gunshots were in the hospital where doctors removed bullets from their bodies.