Update provided by INEC on Wednesday in Abuja indicated that out of 120,600 Nigerians, who had completed their physical registration, 72,075 were male, while 48,525 were female.

Also 1,274 in of the figure were people living with disability.

The distribution of the complete registration by states indicated that Anambra had the highest number with 8,624 and followed by Osun with 8,114.

The update also indicated that Ebonyi had the lowest number of persons who had completed their registration with 959, followed by FCT with 1,134.

According to the update, INEC has received 1,657,566 applications from Nigerians.

The figure of the total applications received included those for voter transfer, requests for replacement of Permanent Voter Cards (PVCs) and update of voter information record, etc.

INEC National Commissioner and Chairman, Information and Voter Education Committee, Festus Okoye, in a statement on the update disclosed that as of the same Aug. 3, the number of fresh online pre-registrants stood at 1,377,733.

Eligible citizens who initiated their registration online and those who prefer to register in-person ab initio had the opportunity to do so in the Commission’s State and LGA offices nationwide.

“As of 4pm on Aug. 3, the number of fresh online pre-registrants is now 1,377,733 while 120,600 citizens have completed their physical registration since the exercise commenced on July 26.”

He noted that the detailed distribution of the registrants by age, State/FCT, occupation, gender, type of registration and disability has been uploaded to the Commission’s website and social media platforms.

Okoye appealed to all Nigerians to seize the opportunity to either initiate their registration online, and or schedule an appointment at their convenience to complete the process or visit any of the Commission’s State/LGA office nationwide to register.

“For emphasis, we wish to remind citizens that the ongoing registration does not include those who are already registered as voters.

“This current exercise is only open to Nigerians who are 18 years and above who have not registered before.

“It is an offence under the Electoral Act for any citizen to register more than once,” he said. 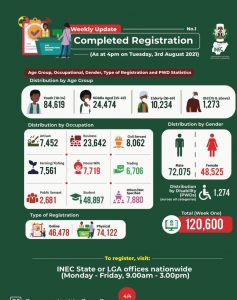 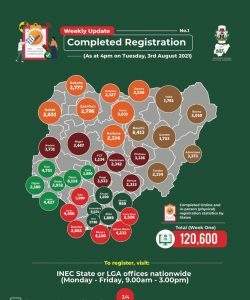 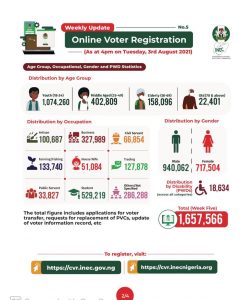 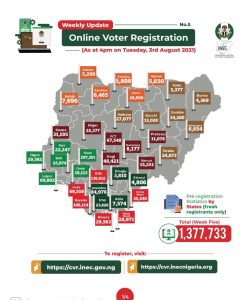