Gombe State Governor, Muhammadu Inuwa Yahaya, says his administration is determined to harness ecotourism opportunities available in the state towards boosting responsible travel to natural areas, conserving the environment, and improving the well-being of the local people. 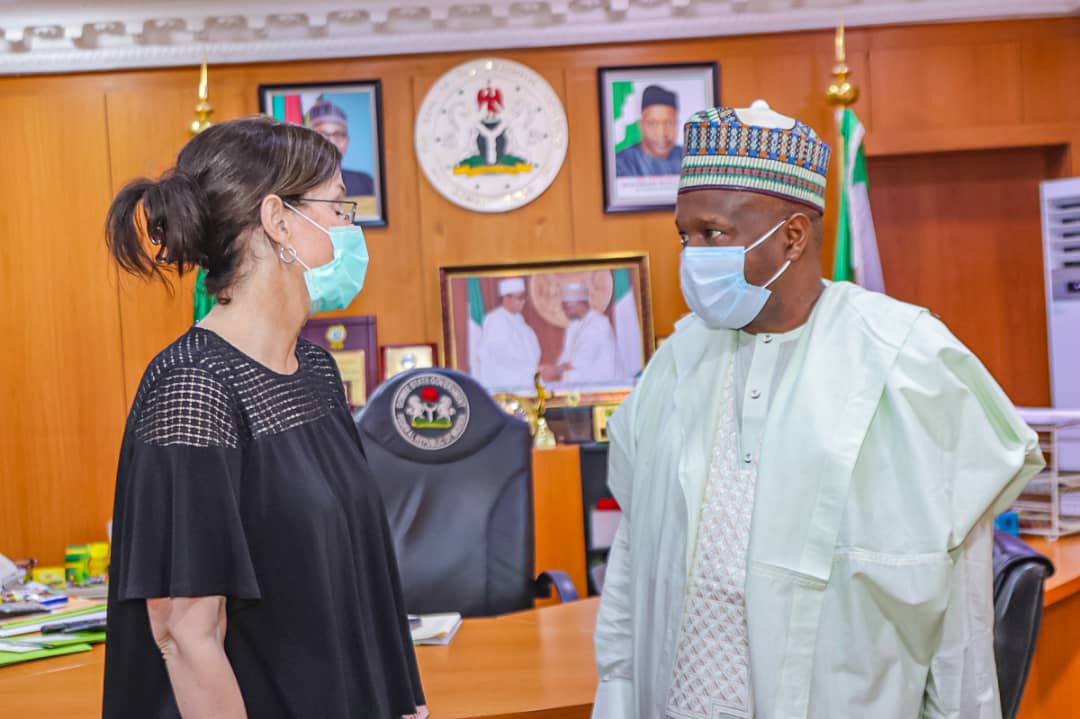 The Governor stated this yesterday when he granted audience to Professor Lynne Baker, a United States-based wildlife conservationist and senior research associate at the Institute for Development, Ecology, Conservation and Cooperation, (IDECC).

IDECC is an organisation working in disparate fields of environmental conservation and sustainable development in megadiverse regions of the world, with special emphasis on West African countries.

Professor Lynne Baker was in Gombe where she undertook a study of the underlining issues surrounding the colony of hipopotamus at Dadinkowa river bank.

The Governor commended rhe wildlife conservationist for taking special interest towards safeguarding the environment and promoting ecotourism. He assured of his administration’s willingness to partner her institute towards unlocking the potentials in that sub-sector of the economy.

“What you have done is like opening our eyes to see the potentials that we have in ecotourism and wildlife conservation. So I will like to thank you most profoundly on behalf of the Government and good people of Gombe State and I also will give you the assurance that we shall provide the enabling environment on which you will carry out your work so that you can give us more ideas on how best we can approach the issue at stake and benefit from the opportunities therein”.

The Governor expressed gratitude to Professor Lynne Baker for supporting the state government with Camera Drones, Life Jackets and other necessary tools for the successful implementation of the research work.

He also assured to continue to provide enabling environment for any person or group of persons willing to prop up development in the State.

“This is a symbiotic relationship that we must keep in the interest of our people, especially those living within the bank of the Dadinkowa river. Much as we protect the endangered species, we must also protect our people from the dreaded animals which are known for destroying farm crops and hindering fishing activities within the area. Hence the need for creating a colony for them cannot be overemphasised “.

The Governor equally intimated the visiting wildlife conservationist on the ongoing efforts by Transforming Irrigation Management in Nigeria, TRIMING to boost irrigation farming in the area and the implications the development will have on the water level.

“Recently between Borno and Gombe states we’ve allocated about 10,000 hectares of land that is being worked upon through the extension of irrigation canals so that will mean the reservoir will serve a lot of purpose downstream and this will see a reduction in the volume of water and may be the implication of that on the population of the hippos and how they generate will be something that needs to be taken into consideration”.

He also hinted that activities are expected to spring up around the Dadinkowa river due to the award of contract for the construction of an industrial park which is leveraging on the 40 megawatts hydropower from the multipurpose dam.

The Governor maintained that his administration has keen interest in maintaining and sustaining the environment and wildlife for the benefit of the ecosystem and the generality of the people.

The US based wildlife researcher, Professor Lynne said she was in the State to undertake study on the population of hippopotamus within the Dadinkowa river axis, the challenges facing the endangered species and to create awareness.

Professor Lynne described the Dadinkowa Dam as a site with huge potentials in wildlife and birds diversity, stressing that her research will be a launching pad for the development of ecotourism in particular and the Dadinkowa community in general.

She said she held a meeting with the local communities around the river bank in the cause of her study tour and also took photographs of the hippos and other species of birds.

Professor Lynne said she is also working with some international bodies to get a grant that will enable her work more closely with the state government with a view to establishing hippos colony so that the species would be confined within a particular area in Dadinkowa to protect the animals from extinction.

She stressed that the measure will also help boost socio-economic activities of the area, as there would be no challenge of hippos grazing or destroying crops or preventing fishing activities.

The Commissioner of Environment and Forest Resources, Dr. Hussaina Goje had earlier intimated Governor Muhammadu Inuwa Yahaya that in the last three weeks, the wildlife conservationist had toured the Dadinkowa dam site and criss-crossed 3 local government areas with a view to getting first hand information on the population of hippopotamus in the area.

” The objective of Professor Lynne’s coming is to get us to have an estimate of the number of hippopotamus at the colonies, provide capacity for our wildlife staff and to create awareness to the local community as well as attract international attention “.

She revealed that her Ministry in conjunction with other sister agencies, as well as a non- government organisation, Jewel Environmental Initiative ( JEI) have provided logistical and non logistical support to the researcher and her home based team for a successful exercise.

In attendance at the meeting were the Secretary to the State Government, Prof Ibrahim Abubakar Njodi, Principal Private Secretary, Usman Kamara and Commissioner for Environment and Forest Resources, Dr. Hussaina Goje and the coordinator of Jewel Environmental Initiative, Isma’il Bima.