President Muhammadu Buhari has stated that the fight against insecurity and other challenges in Nigeria needs divine intervention. 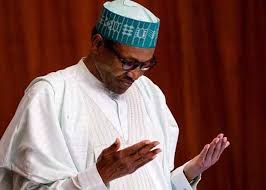 The President made the remark at the ‘National Prayer Session for Nigeria and President Buhari’, organised by the Kano State Government, held at the Sani Abacha Stadium, yesterday.

Represented by the Minister of State for Agriculture, Mustapha Babai, President Buhari said his administration has been making significant efforts to overcome the security challenges bedeviling the country.

The president stated that the Federal Government has also supported security personnel with equipment and quality welfare.

“Despite the support, there is a need to seek divine intervention for the Almighty to bring an end to the challenges”, the president stated.

In his remarks, Abdullahi Ganduje, Kano governor, thanked Buhari for his efforts in ensuring that the State remains peaceful. The governor noted that Nigeria is indeed facing security challenges, and there is a need to seek divine intervention to overcome the challenges.

He stated that the government is ready to make the prayer session an annual event where the state would invite global Islamic scholars to grace the event.

The State government also invited the World Leader of the Tijjaniyya sect, Sheikh Sharif Ali Bil-Arabi, who came to the state to grace the occasion.