…Behind Libya, S’Africa, 15 other African countries

Nigeria recorded the worst performance in the just-released United Nations (UN)’s 2022 World Happiness Report, ranking 118 out of 146 countries on the happiness index. 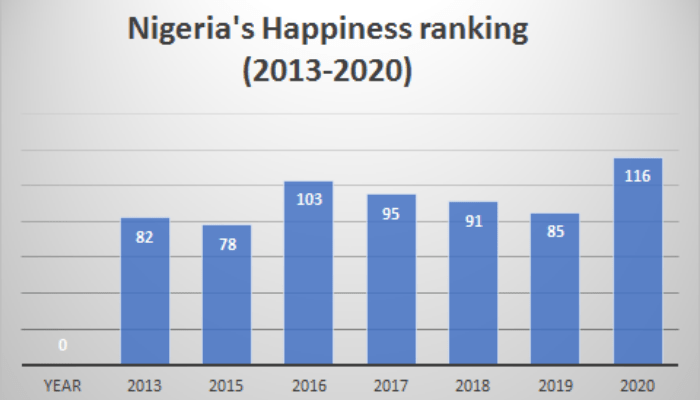 The report, which was released yesterday, two days before the annual ‘International Day of Happiness‘, is issued annually by the UN’s Sustainable Development Solutions Network.

The report ranks nations based on factors such as personal sense of well-being, levels of GDP, life expectancy among others. The list, which is in its 10th year, assigns a score on a scale of 0-10, based on an average of data over three years.

The survey asked respondents to indicate on a 1-10 scale how much social support they feel they have if something goes wrong, their freedom to make their own life choices, their sense of how corrupt their society is, and how generous they are.

Observers say it is no surprise, as the country’s current realities such as high inflation, unemployment and fragile economic growth are not making people happy rather than miserable.

According to the National Bureau of Statistics, (NBS), the country’s inflation, which measures the rate of increase of commodity prices, is 15.7% in February 2022, while unemployment is at a record high of 33.3% in the fourth quarter of 2020.