A primary school and a healthcare centre have been razed by unknown gunmen suspected to be Boko Haram insurgents during an attack on Katarko community, in Gujba local government council of Yobe State.

Katarko community, which is 18 kilometers south of the State capital, Damaturu, has been under attack over 10 times.

According to the residents of the community, the insurgents stormed the community at about 5:30am yesterday, while they were on their way to the mosque for prayers and started shooting sporadically in the air.

Reports revealed that the insurgents proceeded straight to the military formation in Katarko, again shooting sporadically and later set the military base on fire. 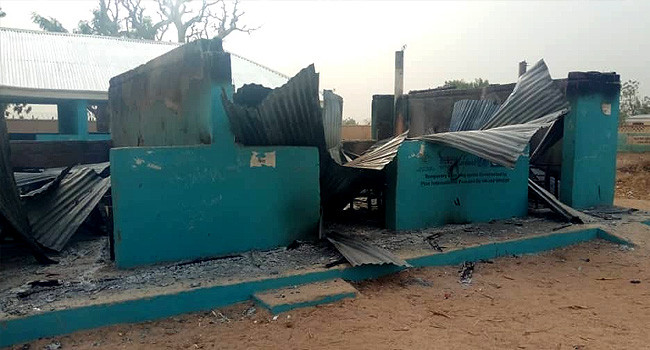 As at the time of filing this report, both the State government and State’s Police Command have not commented on the development.

In a related development, the Chief of Army Staff (COAS), Lt. Gen. Ibrahim Attahiru said that Nigerian soldiers will soon put an end to Boko Haram attacks in the country.

Attahiru stated this on Sunday during his morale boosting visit to the troops of Sector 2 Operation Lafiya Dole of the Nigerian Army in Damaturu.

He assured that the troops will bring the entire insurgency to an end, while assuring them that “all your challenges are noted and I will address all the problems”.