Benue State governor, Samuel Ortom, has doubled down on his criticisms against the President, Muhammadu Buhari. 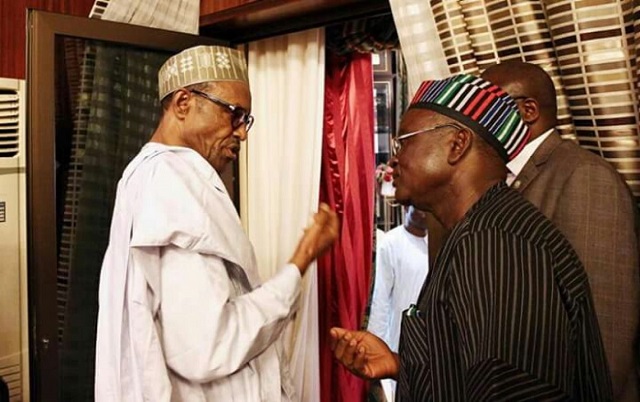 Ortom, in a statement on Thursday afternoon, lampooned the President again stating that he (Buhari) has deliberately destroyed Nigeria. He also called on the Presidency to address the issues stated in his earlier statement criticising their performance since taking power in 2015.

The statement partly reads: “The Governor spoke the minds of most Nigerians on specific areas of failure of the Presidency and its complicity in the heinous crimes committed against citizens by armed Fulani herdsmen and other terrorists. Instead of taking the Governor on those points, Shehu went chasing vain and mundane matters in a desperate attempt to malign the Governor.

“We demand an apology from the Presidency for accusing Gov. Ortom of stirring ethnic tensions and calling for genocide. The Presidency has never hidden its hatred for the Governor and its latest outing only confirms that fact.”

“We advise the Presidency to focus on ending the killing of innocent Nigerians, fix the economy as it promised and stop the stinking corruption under their watch.”.

“No day passes without reports of herdsmen and other terrorists killing defenseless Nigerians in parts of the country. The number of displaced people has risen to millions, yet, the Presidency wants everyone to remain silent while the country burns”.