Residents of Magami in Gusau local government area of Zamfara State has cried for help over the worsening state of insecurity in their communities. 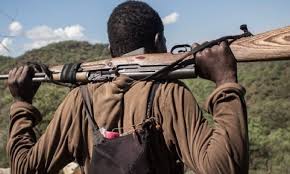 They said bandits are destroying their farm lands and imposing levies on them. ”If you fail to pay bandits the levy, they either abduct you or burn your farm land ”, they added.

However, according to a British Broadcasting Corporation, (BBC) Hausa service report, the State’s Police Command denied the story, saying no complaints had been made before it of any destruction of farmland by the bandits.

A native of Magami said in a phone interview that the area was in a serious calamity. According to him, ”once you leave Gusau, before you reach Magami, is a Herculean task, unless you have an escort. Since the killing of a MOPOL oficer, in any given day, they block the road 4 to 5 times, stop large vehicles and empty their contents. They also impose tax. If you go to Magami, a kilometre to Magami the bandits can stop you, either abduct you or ask you to pay tax”.

”Yesterday the bandits set some places on fire near the entrance to the town,but people teamed up and chased them away before putting off the fire.”

” What happened was less than a kilometre to Magami and the place was on the road. They are doing that to show us if money is not paid to them,they will continue to burn people’s farms.

”There are plans to collect money from community members and pay them. But before that is done, if you dare go to the farm, they will abduct you, burn your farm and demand for ransom. That is our current predicament”.

He said although there were soldiers stationed in Magami town, their lives depend on Almighty Allah, because He is the only one that can protect them.

”This is our problem everyday, our worry everyday day”, he further stated.